EBAY IS A MEASURE OF BRAND VALUE

There are lots of ways to measure brand value.  For marketers it’s a very important metric, which is why they often end up spending large amounts of money trying to measure it.  It occurred to me yesterday that, while not perfect, eBay provides a very good way to measure the value of a brand.  This thought sprang from the fact that the Blackberry Playbook is already being sold at a discount on eBay.  For a product that has only just been launched this speaks volumes for the current state of the Blackberry brand.  Indeed eBay can give you a very accurate read on consumer sentiment towards the ‘value’ of a brand through this kind of price analysis.  eBay can go further though.  The site gives you a clear sense of the popularity of a product both by the volume of products being sold and by the number of bids on each product.  Lastly it gives you a measure for the reliability of a brand.  Search on digital cameras and you will find a host of ‘broken’ items.  If you were to tally the number of broken items as a percentage of those for sale by brand you would a) demonstrate what a sad geek you were and b) get a read on how reliable that product was.  I’m sure people with more brainpower and time than I have could come up with a host of other eBay metrics that would help derive the value of brands.  At the very least though, I would highly recommend that marketers scour eBay to get a sense of the competition and of the community around their or their clients’ products.

Back in 2009 the numbers were very small.  Only two used Twitter or Facebook.  Two years later and things have improved dramatically, well at least in percentage terms.  Based on our latest research, just four Fortune 100 CEOs have Twitter feeds and while the total number of Facebook users approaches 700 million, just nine Fortune 100 CEOs make some use of Facebook accounts.  The four using Twitter are:

When it companies to the companies themselves it is a very different story. All but 19 of the Fortune 100 companies have Twitter feeds and almost all the CMOs do.  What is interesting is that Apple has no Twitter feed, nor does its CEO while CMO was recently lauded for his use of Twitter.  Jobs also has no presence on Facebook.  The absence of top CEOs on Twitter may seem surprising to some.  These CEOs would likely all attract large followings and could use their accounts to add to the company’s personality through their tweets or Facebook updates.  The challenge seems to be one of time and priorities for many.  What several rightly want to avoid is have a ghosted twitter account.  If they are going to tweet they want to be the ones doing it.  Ghost tweets (tweets written by someone in their team on their behalf) lack authenticity and may in some cases give the impression they have too much time on their hands – not something investors would like to think.

So while I think the number of CEOs who tweet is bound to rise, especially as younger CEOs take over from today’s generation, I suspect it will be a long time before even half the top CEOs are tweeting.  Twitter, Groupon, Zynga and several other companies will likely have gone public by the time we get to anything approaching a high percentage.  Until then, you can continue to follow the fake Steve Jobs tweets like the one shown above.  Who knows, their tweets may prove more interesting, even if they’re not very accurate.

It would be easy to view the low CEO numbers as a sign that all is not well in social marketing.  Quite the contrary.  Indeed it’s great to see the number of businesses that have embraced Facebook and Twitter at other levels.  These social networks are now used to engage with a host of different stakeholders from customer, though investors to analysts.  Indeed the level to which brands are now engaging online communities is staggering and goes a long way to explain why traditional forms of media are fighting for survival.  So while Fortune 100 CEOs may be taking things very slowly, the businesses they oversee are most definitely not.

Microsoft shows Apple it can innovate with Windows 8 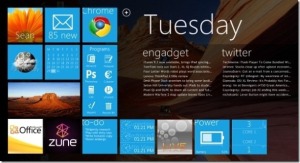 Apple has been grabbing all the innovation headlines with the iPhone and the iPad and its iMac business has benefitted in the process.  Microsoft showed off Windows 8 at D9 today and in so doing showed the world that markets are always open to those who innovate.  Windows 8 has a completely different look and feel to the current operating system.  Gone is the start button and the icons for apps.  Instead the new version will use live tiles.  These will be familiar to those who use a current generation of Windows phone.  Indeed this is part of what makes Windows 8 so clever.  It shares the same interface across mobile and PC, meaning you learn one way to find and access content.  It also makes it easier to share content between systems.  To get a good feel for Windows 8 see the demo on YouTube.  Windows 8 looks very cool and may well be the kind of innovation that will draw Mac users back to the Windows platform.  It also demonstrates why Nokia may have chosen to go the Windows route for its mobile products.  I love it when you can actually see innovation and with Windows 8 that innovation is not just visible it’s also screaming at you.