Will the iPad be good for the media industry? 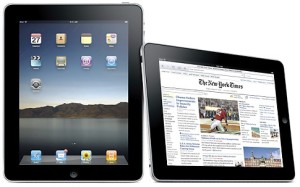 Another way to ask this question:  “will Apple’s iPad be bad for the media industry?”  Right now traditional media is struggling.  I’m not referring simply to print media which is getting more and more desperate for ways to stay alive but also broadcast media, as people spend more of their free time online.  The iPad could be a game changer for the media.  Why?  Well, the iPad does two things:

1.  It creates a new platform for the media – early views of the WSJ on the iPad suggest it is a far better product than the current online version.  This in turn suggests the iPad offers, magazine publishers in particular, new ways of presenting their content.  That’s got to be a good thing.

2. The iPad puts media back into the time equation – people currently spend their time online looking at Facebook, YouTube and Google because they like to explore, make connections, learn etc.  But the iPad creates the opportunity for media to be a part of what they find and even look for.  I, like many others these days, like to get news online.  That said, even a laptop isn’t a great substitute for a good magazine or newspaper.  An iPad may well be.  In other words, given we have all become used to spending time with our computers that we would have spent with our TVs, the iPad may start to shift the balance back towards consuming media.  Of course it will only do that if the content is worth us spending that time.

One thing is clear, if the media doesn’t grab opportunities like the iPad and the Kindle by the horns, then its steady demise will only continue.  That would be a sad, sad situation.  One that’s bad for society and of course for the media moguls.  The latter doesn’t bother me so much but the former most definitely does.

Enduring brands – do they still exist?

Earlier today I was pondering the fact that someone will inevitably produce a better iPhone.  I have no clue whether that product is the Droid.  I very much doubt it.  But it may be.  At this point in the game Apple holds most of the cards.  It has a well designed product, reasonable customer service and the iPhone links to that wonderfully closed world call iTunes.  Google is trying to do an end run around all that with its own links to music producers and it may well get somewhere.  The Android technology also looks like it will be good enough to keep some Verizon customers who would have shifted to the Apple/ATT world.  But Google has a huge mountain to climb.  The noise level around the iPhone is still huge.  A Google news search shows there are roughly 87,000 news stories about the iPhone versus a little under 10,000 for the Android phone.  The stats on YouTube are even more in the iPhone’s favor with just 11,200 hits for the Android versus 385,000 for the iPhone.  But I expect things to change on that front and change quickly.  I have two reasons for believing this:

1.  Verizon has to throw a lot behind the launch of the Droid and when that happens the US public will know that the Droid is a real competitor to the iPhone.

2.  I think the world is ready for someone to compete with the iPhone.  Innovation on the iPhone seems to have stalled.  I own one and I love it but the 3GS isn’t that much better than the original.  The battery life is still dreadful.

All this makes me wonder whether there really is such a thing as an enduring brand anymore.  Competition is more fierce than ever and the tools for competitors to compete using social media mean that any weakness can be exploited and any opportunity grabbed.

We may well have seen Apple’s peak, or we may have seen another competitor try and fail.  We’ll know all too soon.

Years ago I sat in while a journalist interviewed Bill Gates. A PC was on the desk with Windows running. In most of the windows there were Microsoft applications but in one there was a TV show. I was spell bound. It was like I was watching TV for the first time. My awe struck state came crashing to earth moments later when Bill said: “We’ve finally been able to turn a $3000 machine into a $200 TV set.” His point was clear. Who really needed to have a window on their computer that could show TV channels when in most homes there was already a device that did it much better at a much lower price.

This of course was before the Internet took off and people decided they liked to spend a good portion of their previously allocated TV time surfing the Internet. Web based TV has been very slow in coming but thanks to YouTube efforts to bridge the gap between web surfer and TV watcher seem to be gaining pace. Enter the latest version of Apple TV which, along with all your iTunes and iPhoto content, has a YouTube option that allows you to search and select your favorite content. In effect this turns YouTube into another channel on your TV. Right now most of the content on YouTube is pretty grainy making it a poor relation in the channel stakes. My guess is that this will change. But it also occurs to me that if Apple can effectively turn YouTube into a TV channel, couldn’t they also become a natural home for a host of other channels? I’m pretty sure someone could come up with an Internet alternative TV network. One that uses the functionality of the web as well as its obvious distribution benefits. How long before there is an Apple TV Guide?

A few months ago I used YouTube as a measurment tool to see how major brands scored. I ran this simple test again today. The results show that most brands are increasing their presence on YouTube at quite a significant rate. Here’s the scorecard:

The popularity of YouTube is undeniable. This promoted me to see if it could be used to rank major brands. While highly unscientific in some ways and slightly unreliable in others, I used the search engine in YouTube to see which major brands got the most clips when you search by their name.

Now this research took about 5 minutes and as you can probably tell was based on a list of brand names I pulled form an old Fortune article plus a few names I threw in. It wouldn’t be hard to do some more detailed research using the YouTube site and search engine to get a sense of how many clips are appearing each day by brand etc. As it stands I can’t find a way of seeing which brand has the most number of clips associated other than by trial and error. Perhaps YouTube could issue a press release with that data?

Anyway, for those people looking to help big brands with their marketing, it seems YouTube provides a pretty simple way to score companies. There are of course some difficulties and these relate largely to the way the search engines work. For example if you put in ‘Ford’ as a search topic you will get a lot of clips that have nothing to do with Ford Motor Company showing up. Conversely if you put in Ford Motor Company it will only list those clips where people took the trouble to tag the clip with the full name. So YouTube is far from perfect but once again we do at least have another quick and cost effective measurement tool available.

Just for fun I also checked to see what the numbers were like for the bigger PR firms. The results were:

As you can see, the PR agencies have some way to go to catch the big brands….

If like me you occasionally poke around on YouTube for research reasons, you may have noticed an increasing number of videos of things that are for sale. This includes items like cars and houses. This of course makes complete sense as it becomes clear that if you want to buy a big ticket item it might be nice to have more than a few pictures, which is typical on eBay. It would seem logical therefore that Google, as the new owner of YouTube, may just look at adding an eCommerce engine to YouTube to enable people to actually buy the items shown on the videos. YouTube purists may say this will make it even harder to find good content but I suspect the guys in Mountain View could find a solution if the site really does fill up with sale items. Of course, the other alternative is that eBay adds YouTube like features to its site. Watch this space.

I’m a big fan of YouTube. It’s a wonderful piece of technology and a great invention. That said I’m very disappointed to see them carrying footage of the hanging of Saddam Hussein. At what point does YouTube grow a backbone? I know people want to see the footage and I know that if YouTube doesn’t show it, they’ll get it elsewhere but I don’t think that should matter. YouTube should be prepared to set a standard. Right now they’ve sent a message to the world that says: “anything goes.” I for one think that’s very sad.