PR agencies do more than drive news BUT they do tend to focus on the news cycle a great deal for obvious reasons.  Yet PR has to recognize that the way we consume news has changed drastically in the last five years.  Five years ago people had a primary news source, either via broadcast or a daily newspaper. Today they have a broad array of news sources that includes these same outlets, albeit online, but also includes bloggers, friends and people they follow on Twitter or are connected to on LinkedIn.  In such a fragmented market for information it is harder for companies to control their message.  This makes it far more important that companies determine the insight they want the news to create, which in will in turn drive the way they engage with the brand.  Yet all too often companies are so focussed on how to best to get the news out that they spend little, if any, time on what the news means and what they expect the people who should be connected to that news to do as a result.  In a world where we are drowning in information, the brand that goes the extra mile and helps us figure out how to make use of that information will win.  For PR agencies this means changing the way we think about the news cycle.  We need to work with our clients to make sure they understand the real and or desired implications of the news they want to promote.  There’s an old saying – there’s no such thing as bad news.  Perhaps PR consultants should worry less about the news and more about the insight.  Insight drives behaviors and actions and without these a client may well wonder why they engaged with you in the first place.

The media has been replaced 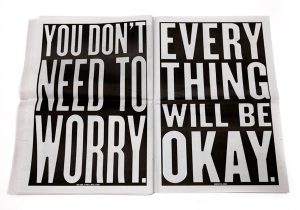 It used to be that we craved perspective and information from the media, largely because this was our only option (well apart from going to the pub with our loud mouthed friends I guess).  Anyway, it’s clear that the media got really good at influencing our behavior, likes and dislikes.  It’s also clear that it got awfully complacent. So when social media arrived it kind of ignored it.  Journalists often decried bloggers as amateurs.  How right they were.  If they’d thought about it a bit longer maybe they’d have realized that being an amateur can have its advantages.  The media was also slow to appreciate that people don’t care who gives them their news, their insight and perspective.  They just care that it is accurate and that it engages them.  We were loyal to media channels because our only choice was another media channel.  Given a completely different choice, many of us took it.  This isn’t to say the media is irrelevant and should become an historical footnote.  The media is potentially more relevant than ever.  Our world is becoming more and more complex and the expectations of the population ever more sophisticated.  We want to know, to be entertained and to be educated right now and in a way that we want.  We want live video and close up photos of the most obscure moments, not just the moments when presidents are shot.  We want to share our thoughts and hear the thoughts of others on what is happening.  We also want to act on the decisions this content may provoke.  All this and more is possible through the media, yet for some reason the media still chooses to limit the ways we participate in their process and they our lives.  So we turn to Facebook, Twitter and other social networks to learn, laugh and get stuff done.  As a result, the newspapers lie unread at the end of the driveway, the magazines in the dentist office curl at the edges and the TV stays turned off.  It’s not too late for the media but the media has to adapt to the new world.  It has to accept that it has competition for our attention.  Until it does, editorial teams will get smaller and magazines thinner.  Blame will of course be put on advertisers but we all know that advertisers are the effect and not the cause.  Come on media, get social, get engaged and show us what you’re made of.  And stop being so precious about the ‘role’ of the media.  Yes, you have a role but that role is to get us engaged, laughing, crying and doing not just listening to one point of view.